The 9 companies that are changing technology in sports world 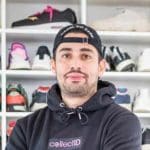 Technology in sports is evolving. The fan scarf is the ticket to the match, and professional soccer players wear body cameras and are wired with microphones during the game, for example. Whether in front of the television or live in the stadium, fans can experience the soccer game in a new way. What sounds like the future became a reality on Saturday, July 16, 2022, at the Deutsche Telekom Innovation game between 1. FC Köln and AC Milan.

Fans have never watched a soccer match so close in their living rooms. In the highlight video, you can experience the decisions from the referee’s perspective with the Ref Cam. Watch Olivier Giroud’s dream goal from Timo Hübers’ perspective and cheer along with Tim Lemperle when Florian Dietz scores.

As a soccer fan, I always find it exciting to watch games and be able to appreciate them to the fullest, but many times a game is better viewed from home than at the stadium.
Last week we had the opportunity to attend the Telekom Cup 2022 as a spectator, which was truly a revolution.
Technology is making great strides, even in the world of soccer.
Are you curious about what new technologies are applying to this wonderful sport?

Brands that are changing technology in sports

The following presents eight selected start-ups that want to revolutionize soccer with us.

collectID – the Truth behind the Product

During this event, we implemented our technology in the scarves of the 1. FC Köln fans, allowing the club to create a new communication channel with them.
If you want to know more about us follow this link

For the owner of the scarf, the following benefits resulted, each of which he received directly on his smartphone via push notification:

News about the upcoming game

Important information about the upcoming game

Food promo during the game

Award when the team scored a goal

Unique video only for the scarf owners

If you want to know more, check their site Bundeling

The digital 1. FC Köln partner network at a glance. Partners who were in the game could meet through the matchmaking function in the business area.

In the SonoCloud Data Hub, all collected visitor data is aggregated, clustered, analyzed, and visualized in one platform. In an individually configurable dashboard, you, as a user: have a full overview of all collected data at all times, can configure and “monitor” hardware/sensor settings, and also export the data. This provides you with relevant data for targeted decisions and actions in real time.

If you want to know more, check their site Sonobeacon

Which is the fastest entrance to the stadium? Where do I have to wait the shortest for my Kölsch? And which toilet is free at the moment? Sonobeacon helped fans make the best use of their time before, during and after the game.

Filmily can generate as much content as the customer needs. You can filter thousands of clips, edit them and create beautiful movies in minutes. What used to be expensive and take days can now happen while an event is still live. Fans can see their participation during the excitement if the game is still real.

If you want to know more check their site Filmily

The fan could upload his or her 1. FC Köln fan video and it appeared on the screen in the RheinEnergieSTADION. Or he received his personal highlight clip after the game.

The RevolMatic automatic beer dispenser is the perfect solution when fast and smooth dispensing is required.

It is used in recreational facilities (aqua parks, zoos, amusement parks) and for larger events such as festivals, concerts, and soccer matches.

If you want to know more check their site Revolmatic

Fans could tap their own beer in the stadium at the 1. FC Köln self-dispensing systems and thus get their Kölsch faster.

Rewe GmbH (also spelled REWE; derived from REvisionsverband der WEstkauf-Genossenschaften), headquartered in Cologne, Germany, is the second-largest food retailer in Germany after Edeka, with around 3,600 stores.

If you want to know more, check their site REWE

REWE provides excitement during the half-time break with the REWE Fan Quiz!

Every fan in the stadium can take part in this interactive live quiz. With a little expertise and speed, fans have the chance to win great prizes!

And it’s as simple as this:

At the start of the halftime break of selected home games, fans scan the QR code for the quiz or log in via the quiz website and are taken directly to the REWE Fan Quiz page.

Stadium announcer Michael Trippel leads through the colorful quiz questions shown simultaneously for all visitors on the stadium screens. Now you just have to be quick and enter the correct answers into your smartphone.

How fast are the FC players per game? How many passes does a player play? At what speed do they shoot? The solution from start-up 433 provides viewers with this and other exclusive data on the game.

If you want to know more, check their site 433

How fast are the FC players per game? How many passes does a player play? The fan received exclusive data on the 1. FC Köln professionals.

Too Good To Go – Save Food, Help the Planet

Too good to go dreams of a planet without food waste and is committed to making that dream a reality every day. With their app, every user can contribute – download, sign up, and save delicious leftover food at businesses near them. What awaits him is always a surprise at a great price, and at the same time, he does good for the planet. Save food now!

If you want to know more, check their site Too Good To Go

FC Köln fans could help ensure that no food was thrown away after the match day. Using the Too Good To Go app, inexpensive food packages could be reserved at the game and picked up at the RheinEnergieSTADION after the game.

In a world where new video content is king immersive experiences that are as effective as live ones. AI is an integral part of our lives every day and the content that is coming from the sports world is evolving. Fans including those who are in the seats with the most acrid smell can now stand the chance to actually be an active participant in the game thanks to an AI-powered bodycam.

Israeli business Mindfly is expanding the live sports experience to a new level, allowing fans to see, hear and feel the next major soccer match or basketball match. The fans can take into the action through a first-person viewpoint (FPV) while their top players sport sportswear that provides the fans with an immersive, live-action video clips, replays and live streams, as if they are playing on the court or in the field because of AI-powered cameras and cloud-based platforms.

If you want to know more check their site Mindfly

The fan could experience the game from the point of view of the 1. FC Köln players. With the bodycam, which was worn by selected players, it was possible for the fan to feel the game from a unique perspective and the action on the pitch almost in real.

Last but not least, we would like to introduce you to the largest sports innovation network:

HYPE Sports Innovation has built the largest global ecosystem in sports innovation. With over 40,000 members, including retail brands, athletic clubs, federations, academia, and over 11,000 startups, HYPE has an unrivaled capacity to reach global partners across all sectors in this highly diverse field.

The company’s business model is to leverage this platform to grow from the surging needs of the sports industry to innovate. Since its inception, HYPE Sports Innovation has built a growing network of 12 locations with partners like 1.FC Köln, Loughborough University, Swedish Olympic Committee, IAPS Taiwan, and New York University, focusing on the hottest sports innovation verticals such as fan engagement, big data, blockchain and more.

HYPE is expanding its unique offerings and services with unprecedented success and value-added for investors, partners, and consumers.

If you want to know more, check their site HYPE